Genbudo Museum was newly reopened in the spring of 2018 after undergoing extensive renovations to house its collection of rare minerals and precious stones as well as newly added fossils that include a t-rex, pterosaur, and Asian elephant.
Located directly out in front of the museum is the natural national monument Genbudo Caves, also a part of the San’in Kaigan UNESCO Global Geopark.

Genbudo Museum is located at the entrance of Genbudo Park, a designated national natural treasure. On the first floor is a weaving workshop where you can learn about Toyooka’s traditional art of weaving that has a 2,000-year history and about its connection to the local people. Join the workshop and create your own original coaster, cup, basket and more from natural willow and cane wood. As you wander the first floor you will also find yourself face to face with an Asian elephant (actually just its fossil), these once roamed the Genbudo caves and parts of the San’in Kaigan Geopark.

On the second floor there are exhibits on beautiful and fascinating minerals and rocks as well as fossils that show the history of life. The second floor also has a t-rex fossil on display. A great place for geology and rock fans, and just about everyone will have fun exploring the museum. See if you can find the glowing and musical rocks on display.

At the restaurant you can enjoy seasonal items made with local ingredients, enjoy a cool drink on a hot day or a warm drink on a cold day’s visit. The outdoor terrace offers a beautiful panoramic view over the Maruyama River and surrounding mountains. Go to the souvenir shop to find rock related items, Toyooka shoes, Toyooka woven bags, sweets, and more.

Located along the Maruyama River between Toyooka and Kinosaki Onsen. Genbudo Park is a national natural monument designated in 1931. Along with the Genbudo Museum (renovated in 2018) it is an educational attraction worth a visit. The basalt caves are part of the San’in Kaigan UNESCO Global Geopark and have also played a significant role in the discovery of reverse magnetization. Access to the park is free and open to the public year round.

Genbudo, Japanese for Basalt Cave and can also be interpreted as the Black Tortoise Cave, consists of 5 caves made of columnar joints that formed over 1.6 million years ago after the magma from a volcanic eruption cooled, contracted, and formed vertical cracks. These curvaceous columns have a distinctive polygonal shape and a honeycomb pattern. The five caves are each named after four Chinese mythological creatures Genbu (Black Tortoise), Seiryu (Azure Dragon), Byakko (White Tiger) and Suzaku (Phoenix). Two caves are named after the Phoenix but are either North Phoenix or South Phoenix.

The recessed parts of the caves are actually a result of people mining the rocks during the Edo period. The rocks were easily split into pieces and used for various things such as foundations for houses, retaining walls and even as a weight for making pickles. This is why you will come across these basalt rocks just about everywhere during your visit to the area, including in the park’s walkways.

Fun Fact: The Japanese word ‘genbu’ meaning basalt originated here at Genbudo when a Confucian scholar visiting the caves decided to call them Genbudo because they looked like one of the four Chinese mythological creatures: Genbu 玄武 the Black Tortoise.

The basalt rocks also hold scientific and historical importance. In 1926, the Japanese geophysicist Motonori Matuyama was the first to surmise that the Earth’s magnetic field had undergone reversals in the past, a theory made here when he discovered that the polar magnetic alignment of this basalt is the opposite of the Earth’s current magnetic polarity. Evidence was found in Genbudo that sometime during the formation of this basalt the Earth had experienced a reverse of magnetic polarity.

While Genbudo does technically have its own train station and therefore is accessible by train (to a point) there is just one small catch. The big river that separates the station and the park. But worry not! We have that taken care of. For our visitors that are coming by train, get off at Gembudo Station (yes, it’s spelled with a ‘m’ instead of a ‘n’), walk down to the street and cross the street at the cross walk. Go down the narrow side street straight ahead and go towards to the river. You should see a sign with times and prices listed near a small concrete dock. There is also a number for you to call and let the staff know that you would like a ride over. The fare is 300 yen for adults and 150 yen for children one way. If you are planning on taking the train be aware that there are a limited number of trains that stop at this station, double check the train schedule before going. There is also a good chance that the boat will not operate during bad weather.

Aside from training and boating it out to Genbudo there are obviously other ways to get here. You can catch a bus from Kinosaki Onsen Station, drive, or take a taxi to Genbudo Park. If you are also up for it you can cycle out to the park, it is a beautifully scenic ride out.

*NOTE: It is possible to call ahead from your hotel or SOZORO tourist information desk in Kinosaki Onsen to inform staff of your arrival time so that they may have to boat ready for you. Please be courteous and stick to your designated arrival time. 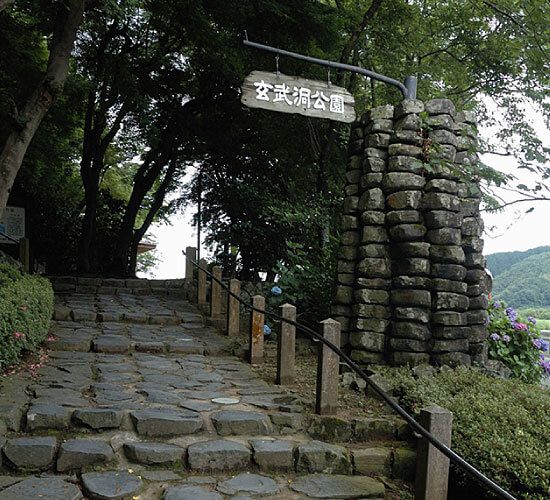 Entrance to the park and basalt caves. 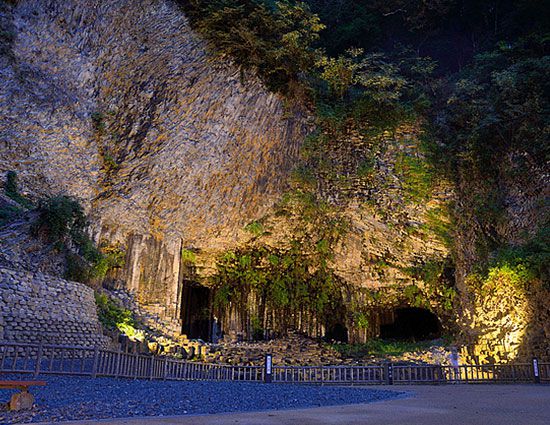 The basalt caves lit up at night, this happens only during selected seasons. 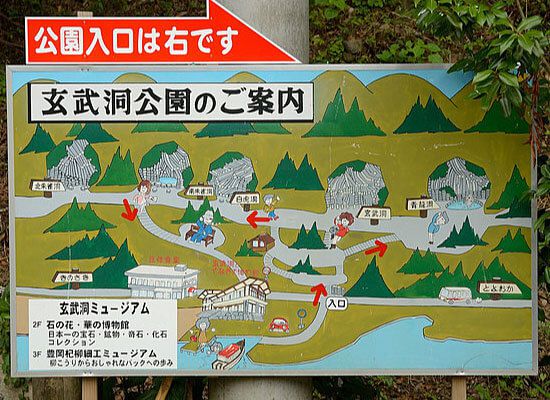 Map of the park and basalt caves. 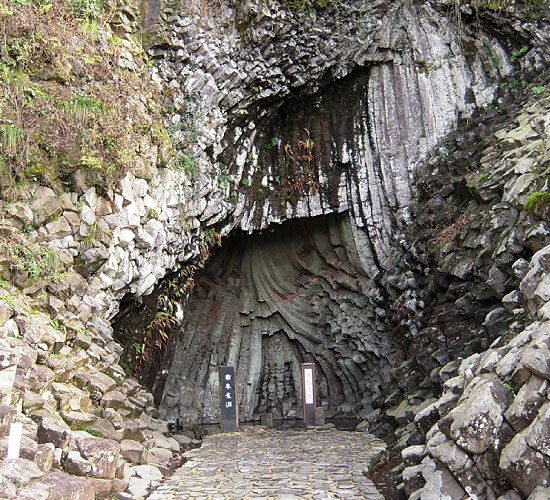 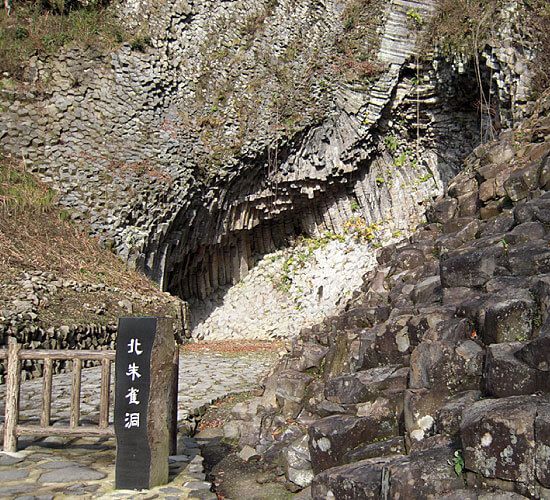 North Suzaku (Phoenix) Cave. If you look closely you can see phoenix in the cave's cutout. 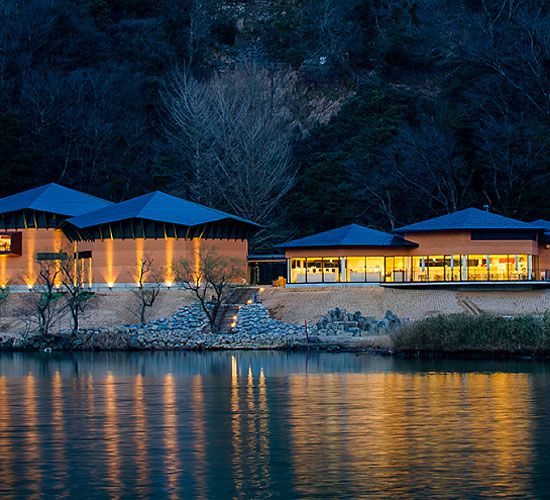 Information listed below was last updated 06/2020 and is subject to change.Contact the business directly for updated information. Note, most businesses can only speak Japanese.

Type
Cafe and restaurant in museum

Park: Has no official hours