Ankokuji is a Zen Buddhist temple with a known history dating back as far as 1345. It is a Zen Buddhist temple, part of the Haitoku-ji branch of the Rinzai School, which is one of the three Zen sects of Buddhism in Japan. The temple burnt down in a large accidental fire in 1717. The temple was then rebuilt and is the current building you see today. The temple is most famous for the 100-year-old Dodan-Tsutsuji (Enkianthus perultas) trees that were planted in the back of the temple when the temple’s Hondo main hall was reconstructed in 1904. 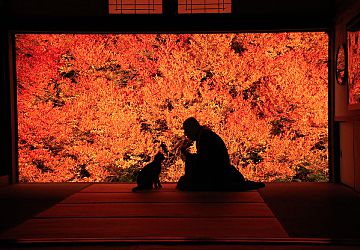 The huge Dodan-Tsutsuji tree at this temple is said to be more than 100 years old and in the autumn its leaves turn a brilliant red. The view of the colored tree from the main temple is like viewing a living painting. Visitors can take turns posing in front of the tree and taking pictures.
The best time to view the Dodan-Tsutsuji is in autumn, usually around November. However, the peak viewing time changes yearly depending on weather conditions. Best also to arrive before the sun starts to set.
The Dodan-Tsutsuji tree can also be viewed any time of the year and is a lush green in the spring and summer. 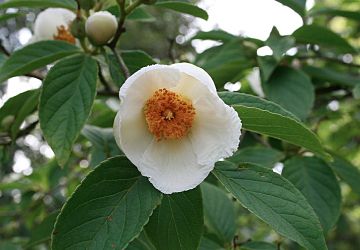 There are several hundred Natsu Tsubaki trees along the path to the old Ankokuji Temple ruins. The white flowers bloom from June to July. The trail also makes for a nice walk.

Business Hours
Open daily all year from 8am to 7pm.

Ankokuji temple is located in Tanto, Toyooka City in Hyogo Prefecture.
Tanto is located about a 45-minute drive from Kinosaki Onsen. It is also possible to access Tanto by bus from Toyooka Station.