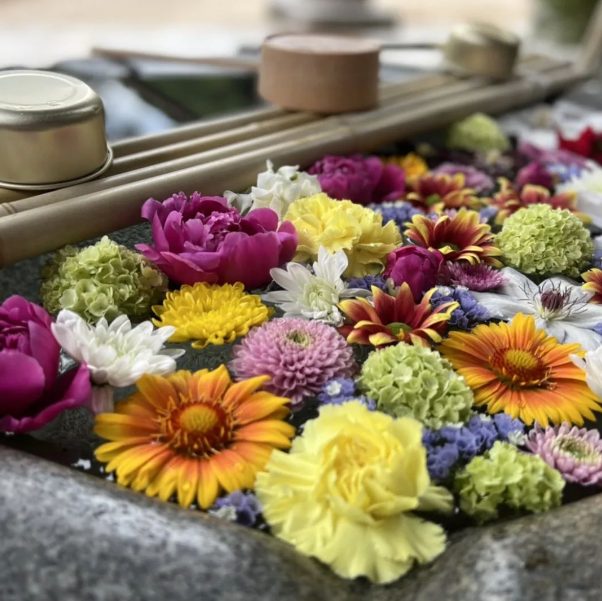 Shisho Shrine, Kinosaki’s guardian Shinto shrine and a sacred worship spot among locals, will be placing fresh flowers atop the clear cleansing water of its chozuya (water pavillion) during the summer months.

During the first and third weeks of each month, worshippers have the opportunity to cleanse themselves before paying their respects to the enshrined gods while appreciating the colorful blooms floating alongside their hands.

Chozuya have historically been vital parts of Shinto shrines across Japan, acting as a purification gateway between worshippers and the sacred area of a shrine. The act of washing one’s left hand, right hand, and mouth before proceeding to the main shrine is called chozu (literally meaning “hand-water”).

While the traditional method of paying one’s respects to Kinosaki’s seven mystic onsen has always been to visit Onsenji Temple atop Mount Daishi, visitors are also encouraged to come to Shisho Shrine during their day of onsen-hopping to enjoy the floral Chozuya and find tranquility in the ground’s lush nature and spirituality.